Sometimes The Bible Can Bring Up Difficult Questions 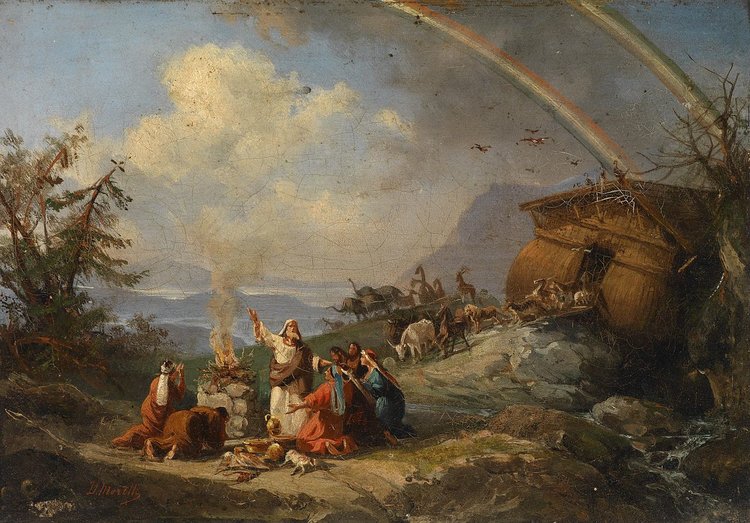 Sometimes the bible can bring up difficult questions for me.  There are events that have taken place in biblical stories that leave me feeling a bit perplexed and I find I have to sit and think about things I have read.

One of those stories concerns an event often celebrated in children’s rooms and nurseries.  It’s the story of Noah and the Ark.  God called on Noah to build a boat and bring in two of each animal of the earth.  This is followed by a flood in which everything not in the boat is destroyed.  Many of us have seen paintings of Noah on the ark surrounded by smiling giraffes and lions and monkeys.  Many of us have told our children about the correlation between a rainbow and God’s love for us.

For anyone unfamiliar with the story of Noah and the ark, I’ll try my best to tell it in an abbreviated form.

Time had passed since the creation of the world and people had become corrupt and violent.  The bible states that “sons of God” went to the daughters of humans and had children by them. Many scholars believe the phrase sons of God, in this context, refers to rebellious angels.  The children were referred to as “Nephilim.” The bible says they were the ‘heroes of old, men of renown.’  We know very little about this because the bible says very little about this.  Truthfully, no one is absolutely sure if we are talking about falling angels here or if the bible means something else.  As to my own opinions, I am secure in saying, I have no idea.

It doesn’t seem that this unusual circumstance was the sole cause of the way the world was. The ‘sons of God’ were not responsible for the entire population of the earth and the bible tells us that all had become corrupt.

Now the earth was corrupt in God’s sight and was full of violence. God saw how corrupt the earth had become, for all the people on earth had corrupted their ways. – Genesis 6:11-12 niv

After seeing the way of the world, God decided to destroy everything on earth.  Everything but two of each animal, and the family of a man called Noah.

I am going to bring floodwaters on the earth to destroy all life under the heavens, every creature that has the breath of life in it. Everything on earth will perish. But I will establish my covenant with you, and you will enter the ark—you and your sons and your wife and your sons’ wives with you. You are to bring into the ark two of all living creatures, male and female, to keep them alive with you. Two of every kind of bird, of every kind of animal and of every kind of creature that moves along the ground will come to you to be kept alive. – Genesis 6:17-20 niv

So, the world flooded and Noah, his family and the animals stayed inside the ark until the water receded. When Noah and his family were once again on dry land, God made a promise to all living beings on earth.

This last part of the story is what one usually sees depicted in the nurseries. A time of new hope and rebuilding.

But the part of the story I struggle with, is the flood.  We don’t see this illustration in the rooms of children.  When we do see a portrayal of the flood, it’s often in an article or sermon about being righteous like Noah and escaping the wrath of God.

When I read the story of Noah and the flood, I cannot help but feel sad.  Sad for all of the people that perished in the raging flood.  All the people that possibly tried to cling to the ark as it floated above the waters.   Animals, adults and even children.  All dying as Noah and his companions survived.

What could possibly make God so furious that would warrant an act of genocide?

Whenever I read stories from the bible, I try to relate to the narrative by placing myself in each person’s shoes.  In the story of the flood, I find myself asking if I would be seen as worthy as Noah.  Or would I be among the many outside the ark, drowning?

It seems easier to place myself in the shoes of the dying.  I know I have made many mistakes in my life and have sinned more times than I can count.  The bible describes Noah as a ‘righteous man, blameless among the people of his time, and he walked faithfully with God.’ -Genesis 6:9 niv

I’m not sure I can regard myself as righteous or blameless and there are times I haven’t walked faithfully with God.  So, if I place myself in the shoes of the corrupt, I’d also have to picture myself pleading for my life and begging God for forgiveness.  Why would God kill everyone but Noah and company? Is God that unforgiving?

In order to answer these questions, I cannot just rely on one story.  If I heard an unusual story about a neighbor of mine, I would probably compare with other stories I knew of my neighbor.  I would equate it to my neighbor’s character.  If the story remains unusual, I would then consider the reasons why.  Was my neighbor acting out of character?  Were there unusual circumstances? Was I hearing the entire story?  Did I have all of the facts?

Within our culture of social media, many have gotten used to forming a judgment of someone based on a simple headline or a small number of words.  These days, we read the snippet, instead of buying the whole newspaper.  I can’t allow myself to do this when the someone is God.

In many ways, I have experienced the love of God through Jesus Christ.  I have seen Jesus in the kindness of others, in the curiosity of children, in the encouragement of prayer.  I know the story of Christ to be one of love, grace, acceptance and forgiveness. In the story of Christ, I see good character in God.

So, like the story with my neighbor of good character, I have to look deeper into the story of the ark.

When I ask myself why God would feel the need to destroy so many and start again with humanity, I have to look closer at the words used in the story.  For instance,

“The Lord saw how great the wickedness of the human race had become on the earth, and that every inclination of the thoughts of the human heart was only evil all the time.”

“God saw how corrupt the earth had become, for all the people on earth had corrupted their ways.”

There are a few pieces in these passages that stand out to me.   Notice how the bible says that ‘every inclination of the thoughts of the human heart was only evil all the time.’

Can you imagine a world in which every single thought or feeling anyone had was evil?  A world where every person thought only evil thoughts all of the time.  Just imagine how many thoughts you have in a single day.  Now imagine if every one of those thoughts were described as evil.

And ‘all the people on earth had corrupted their ways.’   Now I know there are some bad apples in this world, but I could never say that every person that breathed was 100% corrupt.

Perhaps I was wrong in comparing myself to the people in the flood.  As bad as I have ever been, even I could not say that my thoughts and actions are all evil, all the time.

Perhaps God wasn’t trying to kill humanity after all.  Perhaps God was saving humanity from evil.  Like the story of Jesus, the flood story could be one of rescue.  Of salvation.

And then there’s Noah.  If Noah was considered a righteous man, blameless among the people of his time, and walked faithfully with God, could this mean that he just didn’t think evil thoughts 24/7?  Could it mean that he and his family were the last to have faith in God?  If that is the case, maybe we could put ourselves in Noah’s shoes.

After the flood, there is a story of Noah that assures that he was not a perfect man.

Noah, a man of the soil, proceeded to plant a vineyard. When he drank some of its wine, he became drunk and lay uncovered inside his tent.  – Genesis 9:20 niv

Why did Noah get drunk?  Why was he laying in his tent naked?  Is this the behavior of a righteous man?

The thought of Noah laying there thwacked, does give me comfort.  Just knowing that this man with flaws was chosen by God gives me hope in my life.  Like Noah, I am not perfect, but maybe God has a plan for me too.

And what about the uncomfortable feelings I get when I read the story of the flood?  I must admit, even after more understanding, I still get sad at the thought of many people dying.  Even evil people.

Perhaps the fact that I don’t like the thought of others hurting is the most hopeful part of the story of the flood.  Could it be that God connects with us in this story through the many feelings we experience in reading it?  Could it be that God wants us to acknowledge our empathy for others?  Could our empathy be part of great importance in the continued building blocks of our population in this world?

Maybe my feeling of sadness is affirmation that I am not thinking evil thoughts each and every moment.

In this, my sadness gives me comfort.

In this, I am grateful for the difficult questions.